http://www.durgan.org/2015/September%202015/14%20September%202015%20Concord%20Grape%20Juice/HTML/index.htm 14 September 2015 Concord Grape Juice
Seventy five pounds of Concord Grapes were purchased from a Vineyard ($25.00 per bushel) on the Niagara escarpment.The grapes are in peak condition.The removed substrate weighed 5 pounds, and the strained seeds weighed eight pounds. Sixty two pound were made into juice.The fruit was placed in the cooking pot in four batches of ~ 15 pounds each with ten liters of water to make a drinkable texture. The fruit was cooked until soft about 20 minutes, then blended into a slurry. The slurry was put through a food mill of 2mm mesh to remove debris and seeds. The juice was then put into liter jars and pressure canned at 15 PSI for 15 minutes. Forty nine liter jars of juice was obtained, 1.25 pounds of grapes per liter. 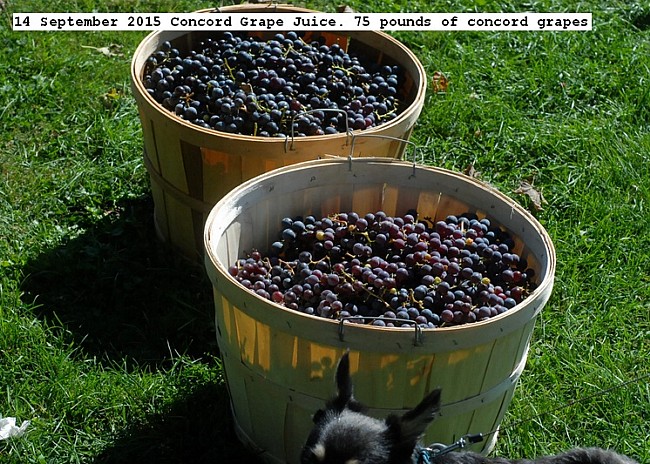