http://durgan.org/2017/January%202017/1%20January%202017%20Mung%20Bean%20Sprouts/HTML/ 1 January 2017 Mung Bean Sprouts
Experimenting growing various seeds/grains to make sprouts, production has been narrowed to using two types, wheat for sprouting to make bread, and mung bean sprouts for daily use. The mung beans from a bulk store are viable, low price, and sprout in a liter jar in four days. They are utilized in soups, made into drinkable slurry with apple juice, steamed as a vegetable, or eaten raw. It was found other types of sprouts are not as active as the two chosen, in other words not worth the effort required. Many do not sprout due to commercial processing. One half cup of mung beans make a liter jar of sprouts in four days. The hulls tend to float and may be poured off and discarded or utilised as desired. I have a jar continually growing on the back of the kitchen sink. 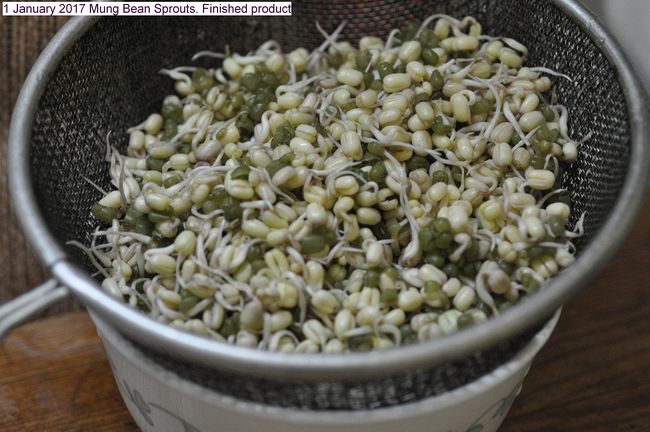