http://durgan.org/2017/January%202017/16%20January%202016%20First%20Month%20of%20Marijuana%20Plant%20Growth/HTML/ 16 January 2017 First Month of Marijuana Plant Growth
Home cultivation of marijuana plant growing. Procedure was trial and error and extracting information from the internet.
Three seeds were germinated by placing on a damp paper towel and placing in a warm temperature of about 25C. The seeds sprouted in three days.
The seeds were then planted in a plastic cup in homemade plant soil, which is used for all of my seedlings. In three to five days the seeds grew a long skinny plant.
To improve the plant artificial light a compact fluorescent lamp 60 watts full spectrum with a reflector was added in a five gallon bucket, with a fan to gently stir the plant. Light was applied 24 hours a day. The soil temperate was about 28C.The lamp generates little heat. When the plant began to perk up, it was placed in a larger pot. It appears to be thriving. The height of the lamp from the plant can be adjusted easily by tying back the electrical cord. It appears by some innovation that the plant can be matured by adding another 5 gallon pail on top of the existing set up. It is important to gently agitate growing seedling to strengthen the main stalk. But the most important variable is light. Sunlight is best but usually not sufficient in a Northern winter climate. 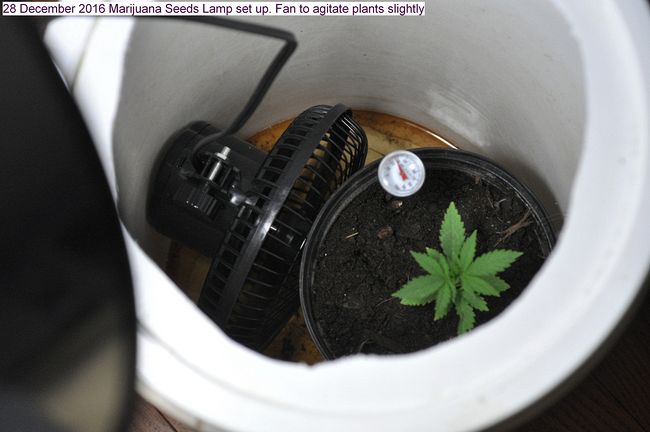