http://durgan.org/2017/April%202017/18%20April%202017%20Gruel/HTML/ 18 April 2017 Gruel
A five ingredient gruel was made to be used for a daily breakfast cereal. Used was half a liter of; sprouted Red Fife wheat which took 3 days, flax, nixtamalized dried Indian Corn, almonds, sunflower seeds blended into slurry with water, placed in a double boiler to prevent burning and cooked for two hours. It is stored in plastic sealed containers and frozen until required. It is used as breakfast cereal daily. The ingredient may be any seeds and nuts, but I usually buy the lowest cost items. The Indian corn from my garden was previously nixtamalized and dried for storage. 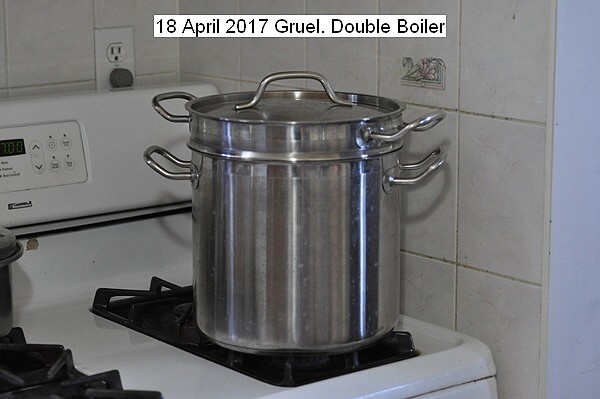 This entry was posted in Uncategorized and tagged 18 April 2017 Gruel, Gruel. Bookmark the permalink.