http://durgan.org/2017/May%202017/23%20May%202017%20Seitan/HTML/ 23 May 2017 Seitan (Reducing Chewiness)
Experimenting to reduce the chewiness of basic wheat gluten called Seitan by the addition of other flours. Nixtamalized dried corn flour was added and another batch using rice flour. A 100 grams of gluten and 100 grams of flour (two batches) was mixed with water to make a dough, which was then formed into balls of 30 grams each. They were baked at 350F for 45 minutes. The small buns are an excellent source of protein and are soft and most palatable with excess chewiness removed. The flour was made with my flour mill, a Wondermill. The Indian corn was previously nixtamalized and dehydrated for storage. The brown rice was simply ground from the store package. 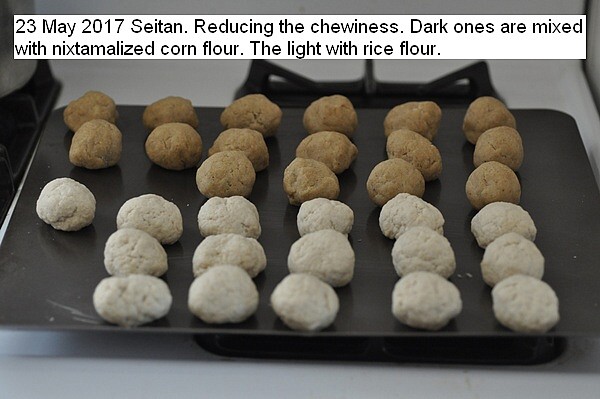