http://durgan.org/2017/November%202017/1%20November%202017%20Hot%20Chili%20Peppers/HTML/ 1 November 2017 Hot Chili Peppers
Hot Chili Peppers from eight plants have been collected as they ripened and stored in the greenhouse to dry. Sun was scarce this summer so the dehydrator was employed, set at 100F until dry about 12 hours. The dried almost crisp peppers will be put through a blender and stored in a jar. They never appear to lose heat. 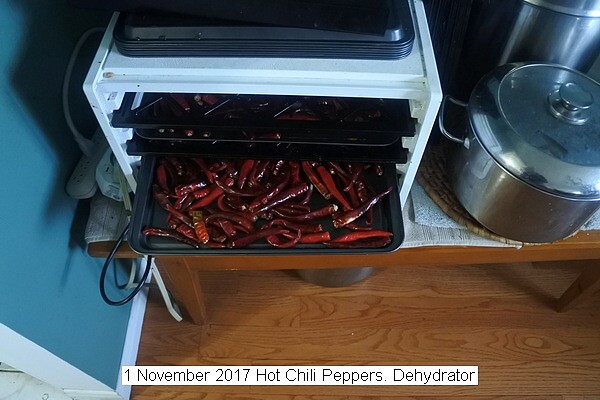 Chili Peppers Dried and blended into a powder.
http://durgan.org/2017/November%202017/9%20November%202017%20Hot%20Chili%20Pepper%20Powder/HTML/ 9 November 2017 Hot Chili Pepper Powder
About 250 grams of chili peppers were dried and blended into a powder. The fruit was picked and kept in a container in the greenhouse as they became dry. After drying and blending they are stored in a closed jar in the cupboard. I suspect they keep forever. I have some two/three years old and still hot and fresh. 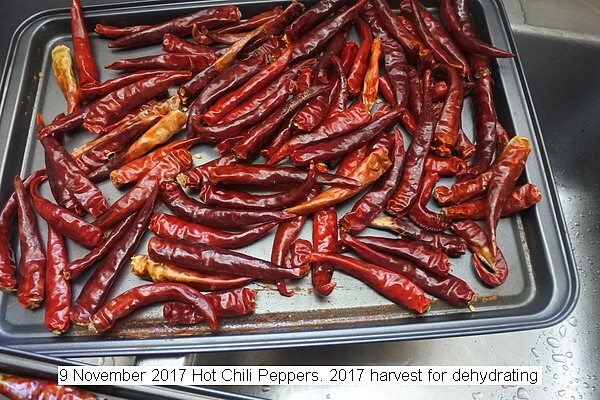