Purchased three 45 gallon sealed barrels for collecting downspout rain water. $20.00 each. Barrels have two bungs one has a pipe thread and the other is a garden hose type. I used the pipe thread. Much difficulty obtaining the fittings from the local hardware stores. Eventually ordered some fitting off the internet. Each barrel on the outlet has an added shut off inline valve. The barrels are placed on two steel cable slings in the horizontal position supported by fence posts about 3 feet off the ground, and are connected together by 1/2 inch garden hose. A dip barrel is used for removing the water, and is transported to the garden area in a wheelbarrow. I had similar but used steel barrels which rusted. The present barrels are thick plastic. There is one connection to the down spout which is a plastic coupler which is removed for winter, since it freezes. Overflow is accomplished by removing the top bung in the intake barrel, water simply gushes out and flows away from the area.
http://durgan.org/March%202019/17%20March%202019%20Rain%20Barrels/HTML/ 17 March 2019 Rain Barrels.

Three Barrels were installed to collect down spout rain water. The collected water is run to a dip barrel, and moved to the garden area in a wheel barrel. Each barrel has a on/off valve not received yet. Three barrels of water is sufficient for my garden needs during the summer. 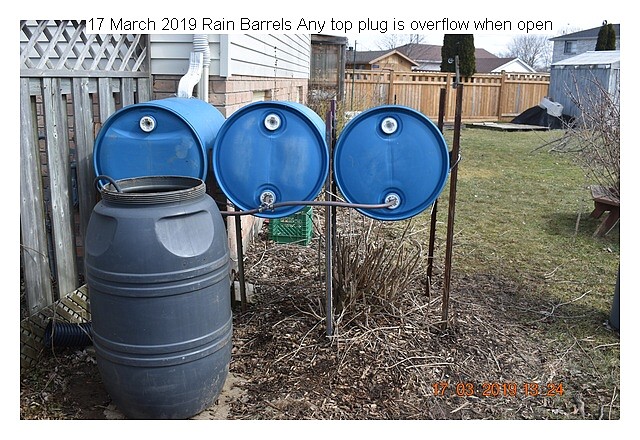 This entry was posted in Uncategorized and tagged 17 March 2019 Rain Barrels.. Bookmark the permalink.