Six mature vegetables; parsnips,beets,celeriac,basil,Brussels sprouts,beans, were processed into pressure canned juice. This was my first experience with celeriac. Weight of each product was; basil one pound, beets six pounds, beans 1.5 pounds, celeriac 2.5pounds, parsnips 3 pounds. Total weight was approximately 14 pounds. The vegetables were covered in water and cooked until soft then blended into a slurry, strained through a 2 mm mesh food mill, the residue strained through a Champion juicer. The liquid was placed into liter jars and pressure canned at 15 PSI for 15 minutes. A total of 13 liter jars were obtained. The pressure canner can accommodate 7 jars, so two runs were required. Annotated pictures delineate the processing. 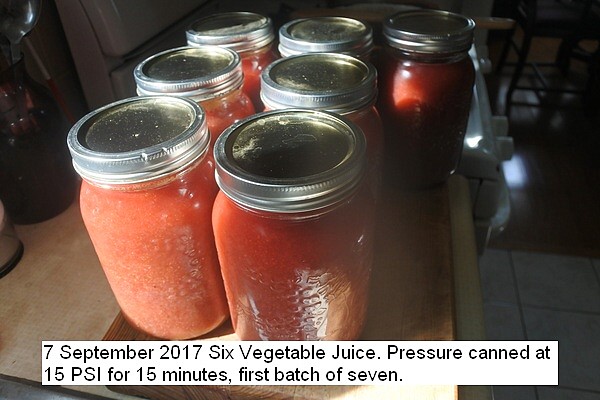