http://durgan.org/2017/April%202017/23%20April%202017%20Making%20Seitan/HTML/ 22 April 2017 Making Seitan
Red Fife whole wheat grains were ground to flour in a Whisper Mill. One liter of wheat was mixed with water into a stiff dough and allowed to sit under water for at least six hours. The object is to separate the gluten from the ball of dough.

How To Make Seitan from Whole Wheat Flour https://eatingrules.com/how-to-make-seitan/

After the seitan has soaked for six hours or overnight it is further processed. The ball is kneaded under cold water and drained often until the liquid is clear. A ball of sticky gluten will form. When draining a screen with large holes should b used since some gluten may be lost at the beginning of the process. Squeeze and work the gluten until fairly firm. It is ready to be utilized, using one of the various recipes.

I mixed my gluten with a lentil smoothie juice and thickened with store bought powdered gluten. It s probably possible to dehydrate the gluten and make a home powder, but bulk gluten s expedient.My method is to cook the seitan in an open pan in the oven at 375F for 45 minutes. This make little soft loaves that are very nourishing and filling, snacks or an adjunct to a meal. 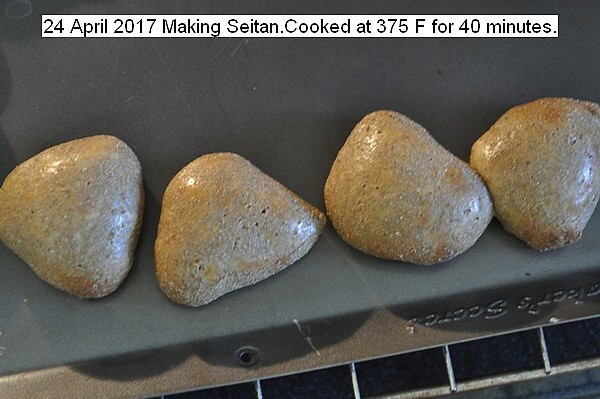 This entry was posted in Uncategorized and tagged 22 April 2017 Making Seitan. Bookmark the permalink.